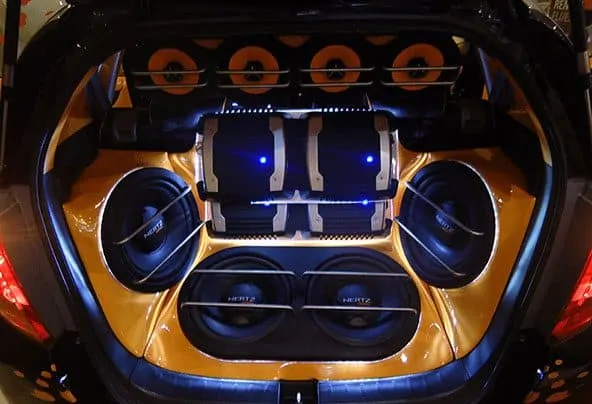 Auto audio is a big thing here in Idaho if you visit a huge city like Twin Falls so I’m glad to oblige the webmaster.

The main drag of Twin is Blue Lakes Boulevard. Blue Lakes is the traffic-light center of South Central Idaho. That’s when you get to evaluate the auto audio systems. That’s exactly what our leader wants (see above).

Remember the Boom Boxes that teens carried on their shoulders blasting out rock music at 150 decibels? Anything above 100 decibels is considered to be damaging by our government who knows about such things music audio information.

That’s why you see jackhammer operators, airport workers, and shooters wearing those things that look like plastic earmuffs.

That’s also why I leave my swimming earplugs in when driving down Blue Lakes.

The Super Auto Boomer is found on Blue Lakes. I’m not sure where they are sold, but I think you can find one on the Internet like anything else you need.

Here is part of the description of that ear-buster as given on the site: KICKER’s KX2500.1 Class D Subwoofer Amplifier delivers 2,500-plus watts to your woofers. KICKER supplies jaw-dropping power in a single amplifier. It’s a fact. This brute serves-up the ridiculous power that other amps claim but can’t deliver. At 2-Ohm loads, the breakthrough KX2500.1 produces more than 2,500 ground-pounding watts for bass that lets ’em know your coming.

I’ve decided what I’ve been calling the Super Auto Boomer is really this baby. It sure in Hades lets you know that it is coming.

The first time I heard one of those audio brutes was from a 1989 Chevy. The car had been in a few fender benders. I decided that these collisions occurred when old ladies had the besednics scared out of them and rammed him.

I invented the word “besednics” for this particular phenomenon.

Anyway, I was about two miles away when I first heard the KABOOM BOOM KABOOM of his woofers. He pulled off the road and then shot out of McDonalds with a coke and a Big Mac®. I caught up with him at the next stop light.

I yelled out the window :”CAN’T YOU TURN THAT THING DOWN?”

He couldn’t hear me of course.

He gave me a big smile with the special sauce running down his chin. He turned the volume down and said, “Thank you! It cost me a month’s wages.”

Then he turned it back up to SUPER VOLUME and drove off. That’s when my conversion van started to shake, shutter, and vibrate.

My bumpers fell from my van to the street. It was that 2,500 ground-pounding watts for bass.